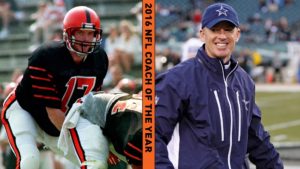 2016 turned out to be quite a year for Princeton football.

Very little was expected for the Tigers, coming off a 2-5 Ivy season in 2015; in fact, Princeton was picked fifth in the preseason media poll.

We all know how that turned out.

Likewise, expectations weren’t high for one of Princeton Football’s proudest captains, Jason Garrett ’89. The former Bushnell Cup winner was leading a Dallas Cowboys team coming off a 4-12 season and dealing with a major injury to its starting quarterback in the preseason.

Just as his alma mater did, Garrett far exceeded even the most optimistic of hopes. Dallas, led by rookies at both quarterback and running back, won 12 games and the NFC East title, and his efforts were rewarded Saturday night as he was named the 2016 Associated Press Head Coach of the Year. Garrett earned 25 of the possible 50 votes, while New England’s Bill Belichick was second with 14 votes.

Garrett is the second Ivy League graduate to earn the NFL Head Coach of the Year honor; Yale’s Dick Jauron won the award in 2001 with the Chicago Bears.