There Has to be a Catch To It 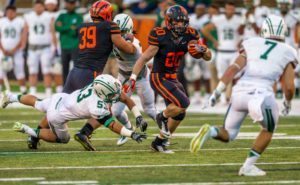 Top to bottom, the Tigers are faster than they ever have been. Bob Surace has the numbers to prove it.

“With the sports science that we are using, we have straps on half the team and our numbers have never been better in terms of max velocity,” said the Princeton coach.  “That doesn’t mean we are the fastest at the top end, but we have more guys running at the top end.

“We have seven, eight, nine more guys who are running in that 18 miles-an-hour max velocity. We have got tight ends and linebackers doing it and that’s pretty rare.”

We will get to the point quickly. San Diego, a first-round FBS playoff game winner in 2016, will not be made fast work of in the September 16 opener.  So a Princeton win against a quality opponent would add further evidence that the Ivy League is not slow man’s football anymore.

Junior tailback Charlie Volker has run a 6.73 60-yard dash and a 10.67 in the 100 for Princeton’s track team. Last season, in the Ivy clincher, he went 39 yards for the putaway touchdown faster than Kurt Holuba’s Mohawk will grow in for sure. Yet, Volker only smiled when asked, for braggadocio purposes only, to declare himself zippier in pads than sophomore tailback Ryan Quigley.

The same goes for the goalline plans in the post-surgical absence of John Lovett. It stands to reason, however, that twin tailbacks will get their shots at the last five yards, whether it be running the ball or catching it.  Princeton, known for using two quarterbacks on the same play, has and will do the same with the tailbacks.

Freshmen Collin Eaddy and E.J. Caldwell both could make an impact this season, should injuries strike. But there is more to learn at the tailback position besides reading a hole and letting natural gifts take over.  Quigley received 22 carries in 2016 as a freshman not only due to the limited availability of senior Joe Rhattigan, but because the kid quickly proved he knew what to do when not handed the ball.

“Ryan had a terrific (2016) camp,” recalled Surace.  “Among all the things we thought he would struggle with–blocking, receiving–nothing proved too big for him.

“He found a niche on special teams. But at running back, he was behind a couple guys who were clearly better players (Rhattigan and Volker), so it was hard to get reps, plus A.J. Glass was a senior who never made a mistake.   So Ryan had three guys ahead of him who were pretty much flawless in how they operated.

“You never want to see a guy injured, but Joe being hurt in the second half of the year opened up a lot of reps for Charlie and Ryan.”

In the rout at Cornell, Quigley had Princeton’s longest run of the year, 50 yards for a touchdown. More such quick bursts from midfield will be appreciated, of course, in the effort to find other ways to get the ball into the end zone besides via Lovett. Operating behind an offensive line nine deep in returning players from the 2016 rotation, there is reason to believe the Tigers will run opponents ragged–that is when they choose not to pass with a quarterback, Chad Kanoff, who was good for 4,000-plus yards in his two seasons as the starter.

“Both Charlie and Ryan get tough yards,” said Surace. “Charlie didn’t break as many long runs last year as he has done throughout his (high school) career so if they both prove more dynamic this season, that will be helpful.  But their efficiency already is sky-high. Charlie’s ability to get four-five-six yards was off the charts.  Ryan has been that type of back too.

“Charlie is up to 210 pounds.  To have that kind of speed at that size is a very special quality.”

So are Volker’s and Quigley’s hands. “Knock on wood, we were really good at protecting the ball (just two fumbles for the entire team in 10 games) last year,” said Surace.

Hanging on is essential on passes, too.

At Lansdale (PA) Catholic, Quigley was thrown to at a frequency unusual for a high school offense. Volker, on the other hand, caught just three passes in his entire time at Rumson-Fair Haven (NJ), yet has proven a natural at it since coming to Princeton. And the Tigers’ good hands aren’t limited only to the tailbacks. On the goalline, junior fullback Cody Smith, an exceptional blocker, may prove more than a snowplow.

“Cody is outstanding catching the ball too,” said Surace.  “At that position, blocking is priority one, but he’s big and strong and hard to take down. You don’t want to get in front of him.”

Smith, who didn’t get to carry the ball much in (Bishop Shanahan, Lincoln University, Pa) high school either, is no frustrated tailback. “I get just as much satisfaction with a good block as a run,” he says.  But if a quarterback has to dump the ball, Smith hardly is a toxic site.

“You only get six passes thrown to you a season, you better catch all of them,” he said.

Perhaps this year there will be more.  Asked if Smith’s usage could increase on the goalline, Surace smiled.  “Anybody’s could,” he said. “We look at everything, so yeah.”

Friends and relatives better look fast as these guys shuffle in and out. Princeton’s last 1000-yard rusher was freshman Chuck Dibilio with 1092 in 2011, before Princeton’s talent dept was stacked this high.  Prior to Dibilio and Surace, Jordan Culbreath ran for 1244 yards in 2008.

The coach believes in keeping people fresh. And Volker and Quigley are all-in on the idea of not being all-in by the fourth quarter.

“The end goal is to win all the games you can,” said Volker. “There comes a point where you realize a certain play may be better for Ryan’s skill, then, next play, you are right back in there again.

In this system, you have to be not only quick to the line but also to mature.

“To be the fastest in the country is our goal,” said Quigley.  “We work with each other. He tries to make me better and I try to make him better. “

To Be Kurt, He Wants It All