When The Moment Proves Inevitable, Rice Will Stay In It 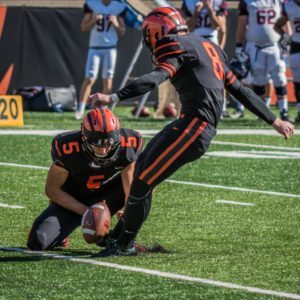 In the ten years since the day at Dartmouth that Connor Loudon drilled Princeton’s last overtime or final seconds game-winning field goal, there has been just one opportunity–blocked in what turned into an overtime defeat in 2015 at Penn.  But trust us, sooner more likely than later, the next chance is coming.

Trust Tavish Rice, Bob Surace says.  This is the guy for the job.

“He has gotten stronger, has looked really sharp,” said the Princeton coach.

“There is more that goes into it than the kicker–the holder and snapper. I am more concerned about having new guys at those positions this year than I am about Tavish.”

Freshman Ryan McNeil takes over for Pat Hall as the long snapper. “Knock on wood, so far we don’t know the guy’s name,” said Surace, a joke about how the best long snapper is an anonymous long-snapper, meaning there is no glory in it, only blame.

Hall was blessedly taken for granted for three strong years. With the first hike that counts still 16 days away, McNeil is making field goal drills a snap.

The holder to replace Tyler Roth is yet to be determined from among ample sets of soft, quick, hands. Rice has a strong-legged freshman backup, Nicolas Ramos, who for three years will have the lonely vigil of keeping the first-string guy from getting too sure of himself, which is kind of an oxymoron for a place kicker anyway. Being sure of themselves is what they all must be about.

“I have done this thousands of times by now,” says Rice.  “I try not to think about the stage.

“You have to trust everybody to do their job and then trust yourself.”

The first field goal he ever tried for Princeton, last year in a fourth-week rain at Georgetown, Rice was a dirty, no-good, double crosser of himself.

He was wide right from 42 yards and then undermined his next chance by thinking of the previous attempt, rather than the only kick that counted, the next one. He missed that, too, then a third, before making the fourth and kicking wide left from 38 on the fifth attempt of the day.

That was the only one from inside 40 and Rice made all four PATs in a 31-17 victory. But it was a debut painfully reminiscent of the second game of predecessor Nolan Bieck’s Princeton career. Shaky snaps helped discombobulate the freshman into failures on three field goals and an extra point during an excruciating 21-20 loss to Georgetown.

Bieck went on to make 39-of-51 three-pointers in a stellar four years then last season yielded the position to another South Floridian, Rice. He, in turn will pass the job along to Ramos, who was a high school teammate of freshman punter Antonio Ferrer at Ransom Everglades School.

That is a lot of Florida in Princeton’s legs but, geographically, the Sunshine State is, after all, the United States of America’s left foot.  Rice got off on a bad one but, since it rains practically every day in a Florida summer, he insists a slick ball and a puddle or two in D.C. did not bother him.  Anyone wanting to cut him a break for conditions is all wet, he says.

“You can’t blame it on the weather,” Rice said. “Those kicks were on me.  After I missed the first one I just didn’t have the right mindset.

“They were long field goals (only one under 40 yards) but I expect more of myself. And I think that prepared me for the rest of the year. Against Harvard, I missed one (from 38 early in the fourth quarter) and then had to hit one in overtime.”

He did, for 22 yards from a tough angle, but Harvard scored a touchdown on its possession and Rice’s chance to be the hero was postponed.   When that opportunity again presents itself, the last thing he will dare think about is the win, loss, renown or shame.  Especially the shame. “Everything is about the process,” said Rice.

After Georgetown, he made five of nine the rest of the season, one of the failures blocked.  His kickoffs boomed — 59.8 yards per attempt–but two went out of bounds and some others weren’t as well placed as Surace, or Rice, would have liked.

All part of the process.  It’s the same ball, same shape, but in high school the goal posts are almost five feet farther apart and, for field goals, the ball is placed on tees.

Rice had plenty of practice without them as he made the rounds to camps before deciding on Princeton. And he says that it doesn’t matter how many feet there are post-to-post since you are aiming for down the middle anyway.

High school is a little more forgiving for wind gusts, hooks and slices, but no one notices any of those things except when the officials under the posts are crossing, not raising, their hands.  From however far out – and Rice has told Surace he believes his range is 55 – they either go through or go wide; by how much doesn’t matter.  And any kicker worth his salt and a Princeton education likes it that way.

Rice, who has a younger brother on his way to kick at Vanderbilt in 2018 and another planting in their footsteps at Miami’s Belan Jesuit Prep, was on a state championship soccer club team.  He played a little defensive end until an ACL tear his sophomore season made him a kicker only, but then waited deep into his junior year before deciding on American football over the rest of the world’s football.

”There is something different about (North American) football,” he said. “For a kicker, it might not have the amount of physical stress of other positions but the pressure is what really attracted me.

San Diego, the Tigers’ opener opponent on September 16, overcame an early 13-0 deficit and used five Western New Mexico fumbles to roar back for a 34-20 home win on Saturday. “One of the ugliest wins I ever have been associated with,” said 74-year-old head coach Dale Lindsay. “But they kept playing.”

Senior wide receiver Justin Priest started the comeback with a 59-yard touchdown reception.  Western New Mexico threw the ball 62 times against a Torero secondary hit by the graduations of both cornerbacks, compiling 464 yards and three touchdowns.

Second-week opponent Lafayette, held to minus-one net yards rushing, was worn down in the second half during a 31-12 loss to Monmouth.

Mike Catapano ’13, a late-camp signee, and Caraun Reid ’14 were among the final cuts of the Houston Texans and San Diego Chargers respectively.  Seth DeValve ‘16, was among three tight ends who have been kept by the Cleveland Browns.

To Be Kurt, He Wants It All

The Tigers’ Houston Natives Are Displaced, Too