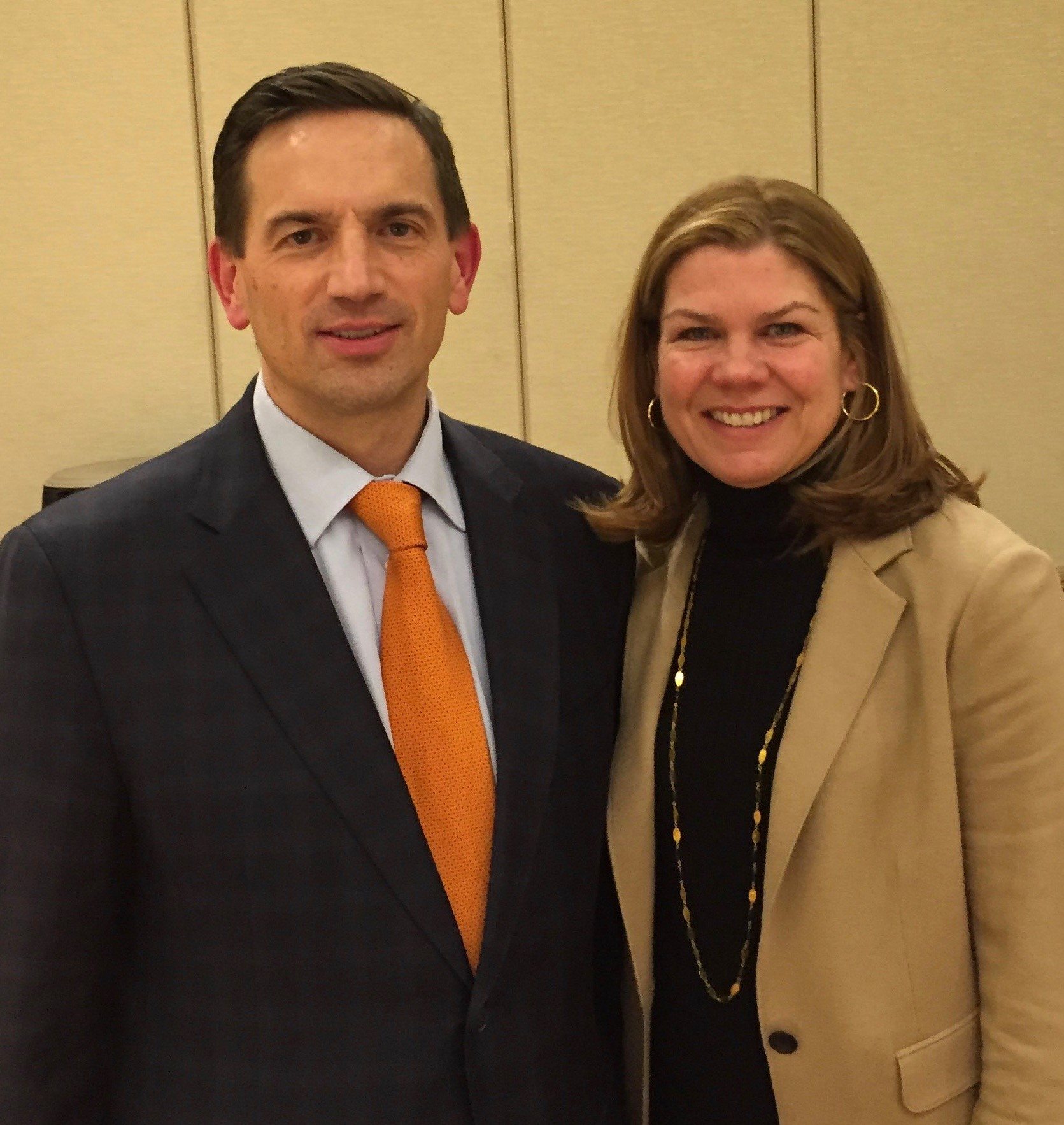 The athletic budget to cover 20 programs at Weequahic High School in Newark is down to $6700 a year, stretching Joe Harvey’s commitment to t

he football team well before his wallet.

“Last year he bought us shoulder pads–11 sets, more than we asked for,” said Athletic Director Gary Westberry. “A good set is $500. He is always stepping up for us.

To Harvey ’86, the President and Chief Investment Officer at Cohen & Steers, the Princeton motto “in the nation’s service and service to humanity” is a dedication to Weequahic, which, essentially, is service to the inner city.  The needs there–economic development, police protection–go far deeper than winning football at a once–and-again proud high school that gave the nation comedian-humanitarian Jerry Lewis, Pulitzer Prize winning author Philip Roth and others. But the essential first step towards extended progress for Newark is a heartfelt demonstration to the children of its meanest streets that somebody cares about them.

Thus, the post-season banquet that Harvey, an investment guy, pays for every year at the Newark Airport Marriott is exactly that: An investment, not an extravagance.

Fifteen years ago, Jim Petrucci ’86, Harvey’s Princeton football teammate and CEO-founder of the J.G. Petrucci Company, Inc., a Union, NJ based real estate development and design firm; wanted the Irvington High School players he was benefiting to have a classier season-ending celebration than a covered dish dinner in the school cafeteria.

Harvey, being, in his words, a fast follower, gave into Petrucci’s urging to similarly sponsor a school in Newark. A chemical engineering major whose recommendation by Petrucci, got Harvey into finance, he has had an impressive climb in that world, but no rise anything like he has gotten from his 11 years helping Weequahic.

“These football players and cheerleaders don’t get a lot of chances to celebrate,” said Harvey on banquet night. “And they have dedicated themselves to something that should be celebrated.

“A lot don’t have a chance to come to a hotel like this. This is pretty special. More kids than ever this year are dressed up in bowties, ties, and suit jackets.  When their names are called and they each get a trophy, they are smiling ear to ear. These kids leave here tonight feeling good about what they have achieved, which leads to greater performance in school.

“Nothing is better than setting a goal, fulfilling it, and being recognized for it. Just like with me in my life or anybody in theirs, exposure to something new maybe opens a door. And that is the great satisfaction to me.

“In [summer, 2016] we took the team into Manhattan to see Jersey Boys and have dinner at Carmine’s.   I’m sure a lot of them hadn’t been to Manhattan or walked through Times Square, let alone gone to a Broadway play.  It tells them, ‘There is a bigger world out there. I think I want to pursue it.’”

There is not a doubt in Coach Brian Logan’s mind that field trip inspired Weequahic’s run to an undefeated 2016 North 2, Group 1 championship. “Just off that, we bonded as a team and never stopped,” said Logan. “It took the kids to a whole other level.”

This year’s team was crushed in the title game, 35-0, by Malcolm X. Shabazz High, a team Weequahic had lost to by only 7-0 earlier this year. But there is a more important score to be kept than Weequahic’s nine wins and three losses in 2017. The NY Giants sent Jonathan Casillas and Vernon Oliver to this year’s banquet to reinforce the precious sense of community these young men get from football is a means to a better life.

“A guy from Jersey City like myself knows what Newark is all about,” Casillas told his audience. “Just because you are (academically) eligible for sports, that is not going to cut it. That’s the bare minimum.

“There were guys better than me in high school who never went anywhere in football because they didn’t care about their education. What you learn in football you will transfer to the rest of your world.  Football prepared me for adversity.”

Rough as it has been for this year’s Giants, a lot of them don’t know the half of truly hard times.  In 2001, Weequahic (pronounced WEEquage) was a place of gang wars, pathetic standardized test scores, and morale so low that a street smart new principal, the late Ron Stone, decided his best way to connect was to take $40,000 out of the athletic budge to create a weight room.  As he hoped, it built more than bodies; pride and confidence too.

The least of the school’s chronic problems was its losing football program. But Alterik White, a former star running back at Weequahic and an assistant coach at Shabazz, came to his alma mater vowing a winner and delivered a championship in 2006.

By then, crowds as low as 20 at the games had grown to 4000. But still pending in this great success story is a happily-ever-after for the school.  With an explosion of charter schools taking a share of the public school pie and Weequahic’s enrollment subsequently shrinking, the school was marked for closing in 2016 until it was saved by a change in administration.

Weequahic, down to barely over 300 students over four grades from 1000, didn’t take freshmen for three years in anticipation of the shuttering, which is how you wind up with four seniors to 34 for Shabazz and lose 35-0. But for now at least, the alums and the people fighting for Weequahic’s survival have won, with athletics enjoying the full support of an old defensive back, Andre Hollis, who is the new principal.

“I grew up in a family that was in public assistance,” said Hollis. “I was the borderline student in high school, one foot in the streets, the other in college.

“The needle could have gone anywhere for me. Sports were my getaway, my safe haven. My discipline came from my sports family, not my own family. Sports provided teamwork to know that I was not alone in my circumstance.

“I didn’t have any college role models from my immediate family,” he said. “I would never have known anything about it. College wasn’t preached to me in high school as the only way out.

“I graduated from Kean University, played (as a running back) on the first New Jersey Athletic Conference Championship team there in 1987 and coached on the second one in 1994. “

Logan has produced two champions and a 75 per cent winning percentage in seven years at Weequahic. Nothing succeeds like that level of success in enticing freshmen who have a multitude of choices within the Newark school system. But, as a Newark cop for 26 years until retiring January 1, Logan is an expert on things relevant to these kids besides football.

One of the many essentially parentless kids he has taken into his home for a night, a week, or even until they finish high school, Ihmir Smith-Marsette, is a freshman at the University of Iowa, where he joined another Weequahic alum, Akrum Wadley, the Hawkeyes leader in rushing and touchdowns in 2017.

Senior running back Robert Leverette is headed for Iowa, too, more first-hand evidence that the bigger world out there that Harvey and Logan tell the Indians about actually exists.

“Joe was a football player,” said Logan. “The kids hear that. And he shows a general concern about who is going to school and what we are doing; is not just writing a check and showing up once a year at this.  He and (wife) Janet are amazing.”

The coach gazed about the banquet room at a Christmas gift that will keep on giving.

“This is first class, the next level,” he said. “The Marriott; that says it all.  We’re sending our seniors out in style, with dignity, their heads up.

“We know it is a blessing to have the Harveys. We were freezing up in late-season games; Joe bought us Under Armor. He doesn’t look for anything in return. There is nothing you can do for a guy like that.”

With his glance around at the joy in the room, Harvey argued he gets back more than he puts in. “You are here tonight, you see this,” he said.

Not only that, you could feel it.  “Joe is a great man,” said Leverette.  “He helps with everything, comes to our games.”

The kid is preaching to the choir: Janet. With the Harvey’s own two kids having reached college age, she has increasing time and plenty of enthusiasm to help her work-stressed husband with the banquet planning and equipment purchases. How does one put a price on turning even one life around?

“Joe is a really kind, smart, person who is always willing to share and not in overbearing way,” she said.  “This is what I have learned and this might help you.’

“These kids need to see there are things they can do with what they are learning on the field.  That’s the biggest impact Joe has had from football–learning how to be on a team and be a leader. The biggest goal is to set expectations going forward.”

To do that, Harvey has pushed Weequahic’s participation in the AthLive Foundation, a seven-year old initiative to deliver grant funding, training and resources to create an adult mentoring position called an Academic Life Coach. Harvey is dedicating that effort to Hank Towns, Princeton’s retired long time equipment manager.

Every year, in addition to a big celebratory meal for about 200 players, cheerleaders and parents, Harvey gifts each player and cheerleader a book. This year’s selection was Harper Lee’s classic To Kill a Mockingbird.

“It is about civil rights, race, character, the loss of innocence, society and all its dynamics, relevant to today and what we can do to make our communities better,” said Harvey.

Truth is, even independently wealthy altruists have a need for community.

“We are both frustrated ex-jocks who want to be a part of a team,” said Petrucci.  “What I have found with all three of the head coaches I have worked with at Irvington, and Joe’s two at Weequahic is that there is room on the team for us.”

There is always space for one more, too.  This year’s banquet keynote speaker, Leon Baptiste, Weequahic ’83 and founder and CEO of LB Electric, was so impressed he pledged to the assemblage to pick up half the tab next year.

“Budget cuts are not unique to Weequahic. But then neither is community support. There are a lot of people who help develop these kids.   If we can help out in little ways, that’s great.

“There are no shortages of inner city schools where people from the Princeton football community can get involved.  It’s pretty easy to do.  And a way to use football to make a difference.