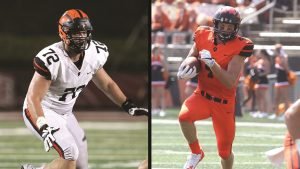 Sweigart has been the anchor of the Princeton offensive line for the last two years, when the Tigers have led the Ivy League in both total and scoring offense. He became only the second Tiger, joining former NFL lineman Dennis Norman ’01, to earn consecutive first-team All-Ivy League honors on the offensive line over the last 22 Princeton seasons. He now includes third-team All-America honors after helping Princeton produce the FCS’ second-ranked passing offense, as well as the fourth-ranked scoring and total offense.

Sweigart started the last 30 Princeton games, all of which were started by 2017 Bushnell Cup winner Chad Kanoff. He was in charge of protecting Kanoff’s blindside, a matter he said both during and after the season was a primary motivator throughout his Princeton career. The fact that Kanoff never missed a start tells you how successful Sweigart was in his role.

Horsted, who earned fourth-team All-America honors, also had a record-setting season. He broke the Princeton single-season receptions record and finished third on the Ivy League list with 92 catches; it was the most catches by an Ivy League wide receiver since 2002. His 14 touchdown receptions also broke a Princeton record and ranks second all-time in the Ivy League, and his 1,434 receiving yards is sixth-best in Ivy League history.

Horsted joined classmate Stephen Carlson to become the first duo in Ivy League history with double-digit touchdown seasons. The pair combined for 25 touchdown catches in 2017, which was more than any other Ivy League team scored the entire season.

Not Only Did ’18 Class Members Pull Together, There Was No Pulling Them Away