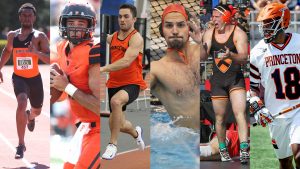 The Princeton University Department of Athletics has named six finalists for the William Winston Roper Trophy, given annually to the top senior male athlete.

The winner of the 2018 Roper Trophy will be announced at the Gary Walters ’67 Princeton Varsity Club Banquet on May 31.

Carrington Akosa
Carrington Akosa has dominated the Ivy Heptagonals sprints over the last four years. He was the 2016 Indoor Most Outstanding Track Performer of the Meet as the champion in the 200 and runner-up in the 60. Over the last two years, he won the 60 and finished as the runner-up in the 200. His efforts helped Princeton win Ivy Heps titles all four indoor seasons.

Akosa was the 100 champion this past spring as Princeton won its third outdoor team title in his four years. He was second and fourth in the 100 as a freshman and sophomore, and he placed third in the 200 both years as well. In addition, Akosa helped the 4×100 relay to a championship and second-place finish in 2017 and 2016. He finished his Ivy Heps career with an incredible 122 points both individually and in relays.

Chad Kanoff
A Pacific Palisades, Calif., native who graduated from the Woodrow Wilson School of Public and International Affairs, Chad Kanoff rewrote the Princeton football record book throughout his championship career. An All-Ivy League starting quarterback during the Tigers’ 2016 Ivy championship season, Kanoff produced the most statistically dominant season for an Ivy quarterback last fall as a senior.

Kanoff, who won the 2017 Bushnell Cup winner as the Ivy League Offensive Player of the Year, set the Ivy League record with both 3,474 passing yards and a 73.2 completion percentage during his senior season. He broke the Princeton single-season record for passing touchdowns, and he set the program record for career passing yards. Kanoff helped produce the Ivy League’s top-ranked offense in each of the last two seasons, and his efficiency was never more apparent than when he completed 31 of 35 passes for 421 yards and two touchdowns in a 52-17 win at Harvard last fall.

Kanoff, who started the last 30 games of his career for Princeton, signed a contract with the Arizona Cardinals in the offseason.

August Kiles
August Kiles was either the champion or the runner-up in every single Ivy Heps pole vault during his four years. He won the 2017 outdoor title, and he placed second the other three years. Kiles won three indoor titles, including one during Princeton’s championship victory this past season; he also earned a point in the heptathlon to help Princeton win its fourth straight Ivy Heps indoor title.

An honorable mention All-America, Kiles competed in the 2017 NCAA Outdoor Track & Field championships and has been a three-time qualifier for the NCAA Regional. He owns the Princeton record in the indoor pole vault at 5.42 (17-9.25), which is the second-best height in Ivy League history, and has the third-best school mark in outdoor pole vault with a 5.31(17-5), the sixth best clearance in Ivy history.

Vojislav Mitrovic
An economics major from Novi Sad, Serbia, Vojislav Mitrovic is one of just four Princeton men’s water polo players all-time to be named an All-America in each of his four years.

Mitrovic was selected as the 2017 Northeast Water Polo Conference Player of the Year after going 17-6 with a .588 save percentage and 297 saves. He also added 33 steals and 19 assists for a team that reached the NWPC Championship Game.

He also posted the best save percentage of his career in 2016 with a .622 mark, snagging Honorable Mention All-America and second-team all-conference honors. Mitrovic posted 20 victories, 301 saves and a .600 save percentage in 2015 as Princeton secured the CWPA championship.

Mitrovic lost just three times as a freshman in 2014; he led Princeton to 18 victories that season, and he finished with 67 wins in his career. The Tigers won at least 20 games in three of his four seasons, highlighted by the 2015 CWPA title.

Jonathan Schleifer
A chemical and biological engineering major from East Brunswick, N.J., Jonathan Schleifer achieved several firsts for the Princeton wrestling team, which made dramatic gains during his four years in Orange and Black.

His debut season saw Schleifer become Princeton’s first Ivy League Wrestling Rookie of the Year, and he followed that by becoming the first Tiger to reach the championship match at the prestigious Midlands Championships. As a senior, he would repeat as a Midlands finalist, and he upset the No. 2 seed to reach his first EIWA final as well.

His most impressive feat, though, required incredible consistency. Schleifer graduates as the only Princeton wrestler to ever qualify for all four NCAA Championships during his career. A team captain, Schleifer won 82 matches throughout his career, including a key overtime win at Harvard to help the Tigers wrestle for an Ivy League team title for the first time in 30 seasons. He had other notable wins, including an overtime victory in the “Battle at the Birthplace” and several victories in the “Grapple at the Garden.”

Austin Sims
A politics major from Fairfield, Conn., Austin Sims finished his career as one of the highest-scoring midfielders in Princeton men’s lacrosse history, with 82 goals and 29 assists for 111 points. He began his career as a defensive midfielder and had no goals and two assists as a freshman, but from there he improved each season, to 23 goals as a sophomore, 27 goals as a junior and then 32 goals and 16 assists as a senior.

Sims, the only Princeton player in the last 22 years with back-to-back six-goal games, was a first-team All-Ivy League and third-team All-America selection as a senior. He was a second-team All-Ivy pick as a junior, despite missing a third of the season due to injury.

Sims was also the 20th pick in the 2018 Major League Lacrosse draft and the captain of the gold-medal-winning US team at the 2016 World U19 Championships.

There is Not Just Depth in These Defensive Recruits, But Length