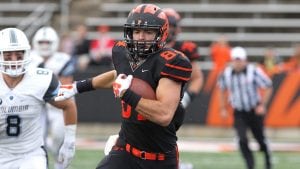 Last year’s Princeton-Columbia football game was a thriller that saw a pair of lead changes over the final two minutes. If the 2018 meeting provides the same drama, a national audience will be able to enjoy every moment.

The Ivy League opener for both historic programs has been moved to Friday, Sept. 28, and will be one of six Ivy football games televised live on ESPNU this fall, part of the new partnership between the lvy League and ESPN. The Ivy League’s new partnership with ESPN will include six Ivy football games on ESPNU throughout the 2018 season. All eight Ivy League teams will appear at least once on the six ESPNU broadcasts, and the Princeton-Columbia game will be the second of the six matchups.

The television package, part of the Ivy League’s partnership with ESPN, will feature five games on Friday nights, beginning with Harvard at Brown on Sept. 21, and will conclude with Yale at Harvard at Fenway Park on Saturday, Nov. 17. In total, all 41 Ivy League home games will appear across a variety of ESPN platforms. Additionally, the League will announce games that will also be available through its number of regional television partners later this summer once the details are finalized.

New this season, the League will conclude its schedule with a quartet of regional rivalries: Penn at Princeton, Cornell at Columbia, Yale at Harvard and Brown at Dartmouth.

“We look forward to continuing to provide significant visibility for Ivy League football on Friday nights during our first season with ESPN,” Ivy League Executive Director Robin Harris said. “Complementing this schedule with the League’s regional and digital presence will once again produce extensive opportunities to showcase the Ivy League’s storied tradition, modern success and continued impact on the game.”

The Columbia game will be one of only four road games for Princeton during the upcoming 2018 season, and will remain as the Tigers’ Ivy League opener for a 19th consecutive season. Princeton is 15-4 against the Lions over that stretch (70-16-1 overall), but one of the losses came last fall, when Ronald Smith caught a 63-yard touchdown pass with 1:12 remaining in regulation of a 28-24 Columbia win. Only 1:36 earlier in the game, Stephen Carlson caught a 27-yard touchdown pass from eventual Bushnell Cup winner Chad Kanoff to give Princeton a 28-24 lead.

In a move that will significantly increase its overall exposure for all varsity sports, the Ivy League will begin airing events on ESPN in August, with over 1,100 League events scheduled throughout the academic year.

For Victor Prato, Giving Up Never Was an Option