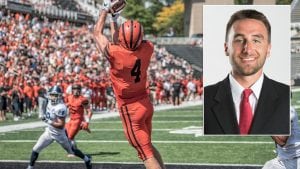 Mark Rosenbaum, who spent the last two seasons as an offensive assistant at Rutgers, will serve as the next wide receivers coach at Princeton, it was announced by head coach Bob Surace. Rosenbaum replaces Dennis Goldman, who retired in the offseason following a vaunted coaching career that spanned more than four decades.

“What excited me about the opening here was that it was a chance for me to work at an institution that has a unique combination of academic excellence and a great winning tradition,” Rosenbaum said. “From people close to me, I had only heard great things about Coach Surace and the staff and I saw it as a great opportunity for me to learn and grow professionally.”

Rosenaum spent the last two seasons primarily working with the wide receivers at Rutgers. Previous to that, he coached wide receivers at Moravian College during the 2015 season. With the Greyhounds, Rosenbaum performed a variety of roles that included instructing, preparing and organizing long term goals of the football program along with increasing efficiency of the day-to-day operations. With the receivers, he directed daily meetings to cover passing concepts, run game responsibilities and techniques pertaining to receiver play.

“Mark came to the interview very highly recommended and wowed us with his attention to detail and overall knowledge of wide receiver play,” said Surace, a two-time Ivy League Coach of the Year. “We believe Mark shares Dennis Goldman‘s work ethic and passion and will continue to help our wide receivers play at the standard Princeton football has seen the past eight years, and we are excited for an outstanding season as we get on the field in training camp in August.”

Rosenbaum previously worked at his alma mater, Susquehanna, as an offseason student assistant from Nov. 2010 to March 2014. He was a four-year letterwinner for the Crusaders as a signal caller and named Team MVP as a senior after completing 87-of-132 passes for 1,129 yards with eight touchdowns.

Rosenbaum graduated from Susquehanna in 2014 with a double major in finance and economics. He is originally from Long Valley, N.J.

He will inherit a group of wide receivers coming off one of the greatest offensive seasons in program history. The rising senior duo of Jesper Horsted and Stephen Carlson led the way; they combined to catch 163 passes for 2,161 yards and 25 touchdowns, while rising junior Tiger Bech added 40 catches and nearly 600 receiving yards of his own.

Goldman Was The Best of Catches for Princeton

Here’s to Six of Princeton’s All Time Winners