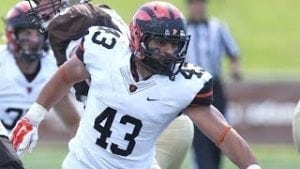 After John Lovett put up 44 points in directing scoring drives on seven of Princeton’s first eight possessions of the season, it seems absurd to have to cut him any slack for not having played in 18 months. The quarterback made that truth so easy to forget that apparently he did, too, trying to force some things.

Lovett was 11-for-20 for 177 yards, two touchdowns, zero interceptions, and ran for two more scores. He also badly under threw a tight end screen that Graham Adomitis probably would have taken into the end zone, forced up one parabola off his back foot that easily could have been intercepted, and his 21-yard touchdown run turned out to be an improvisation after the quarterback’s misread on a run option.

You win 50-7, as Princeton did Saturday night over Butler in Indianapolis, and none of those things end up mattering. Until, of course, in a close game, they do. Coach Bob Surace and Offensive Coordinator Sean Gleeson expect a more measured Lovett Saturday against Monmouth, then an even better one than that in the Ivy opener the following Friday at Columbia

“John is like a linebacker playing quarterback,” said Surace Sunday, after watching the game video. “His adrenaline gets going, he is fiery, and just has to learn to take a deep breath and get himself playing like a quarterback.

“One of the reason I kept him in the second half was that I wanted to get first downs to keep the clock going and make them honor his run threat, even though he was handing the ball off almost every play. The other reason was to get him more game action.

“When a great basketball players takes a contested shot, the coach is saying, ‘No no, no! Then ‘Yes!’ Quarterbacks get fooled by an alignment or make the wrong decision after a snap every game and it results in a sack, an incompletion, or worse, an interception. John turned one into a 21-yard touchdown.

“The throw on the second play (63 yards for a touchdown to Jesper Horsted) was right on the money and John made some other really good ones. But he missed a few throws that he hadn’t all camp.

“I know him. If he’s not 100 percent on everything he does, he makes the corrections. I’m excited to see the progress he is going to make.”

The game really was won on the ground; the Tigers pounding out 326 rushing yards to Butler’s 66, 18 of which were on the one play that set up the Bulldogs’ only touchdown. There were instances of protection breakdown, but an offensive line with three new starters did some robust plowing.

“In particular, (new starting center Alex) Deters did a heckuva job,” said Surace. (Charlie) Volker (162 yards) really ran well, Collin (Eaddy) had a couple big runs and so did Trey (Grey) and Ryan (Quigley). The blocks got our guys into the second level and the runners made guys miss, so we got to the third level.

“Butler scored its touchdown and was excited. Bang, next play Charlie breaks a [47-yarder] and we score in two more plays. Took some hope away.”

Butler ace receiver Pace Temple caught a touchdown pass among seven receptions but the Bulldogs’ only reception of more than 20 yards–22 by Anthony Scaccia–came on the first play from scrimmage. There was a linebacker coverage error on the Temple touchdown, but otherwise the pass coverage was stellar.

“(Safety) Ben Ellis had a great game, almost had two picks, and we had some linebackers come out to the flat too. Our interior linemen pushed the pocket and we forced (quarterback Will) Marty to throw into tight windows.”

Surace took seven freshmen from the recruiting class 247 sports judged the best in the FCS to Indianapolis and was able to play them all, not just on special teams. Punter George Triplett, receiver Dylan Classi, running back Tre Gray, offensive tackle Henry Byrd, nose tackle Alex Kilander, linebacker Daniel Beard and defensive back Christian Brown all acquitted themselves well.

“The humidity last week was off-the-charts high, and with a hot forecast in Indianapolis, we went in with a plan to play more guys,” said the coach. “Some of those freshmen–Byrd, Kilander and Beard–were playing when the game was still in doubt. And then in the second half I had a chance to get some starters out and use everybody, which was great.”

Sophomore kicker Nico Ramos was three-for-three on field goals of 22, 23, and 34 yards. A blocked extra point was much more attributable to a protection breakdown than any absence of lift.

“He has been very accurate; we were confident he would do a great job,” said Surace.

Ramos was hurt last year while Tavish Rice kicked through an injury, one more absence that helped a 5-1 start turn into a 5-5. Rice, who is building strength following surgery, for now will just handle the kickoffs, only three of 10 being returned Saturday night.

“I thought Tavish kicked off great,” said Surace. “To use him on field goals at this point is not just a matter of one kick but how many he does into the netting to get ready.”

We are almost into the second hand in counting the number of blanketing Tiger performances over the last three seasons, including 50-7 at Cornell in 2016, and 52-17 at Harvard and 53-0 at Brown in 2017.

Where does 50-7 Saturday night at Butler rank for style points? Let you know at the end of the year. Perfect as it seemed at the time, the Brown rout last year didn’t seem quite as noteworthy after the Bears went 0-7 in the league. And who would have ever thought the rout at Harvard would be the last game the Tigers would win?

Surace just coaches ‘em, doesn’t rank ‘em. But he believes the one on Saturday night may grow more impressive before the season ends.

“I still think Butler (2-1) is a playoff contender,” he said. “And I think their coaches think so too. There are games when things go right and go wrong. We beat a good team.”