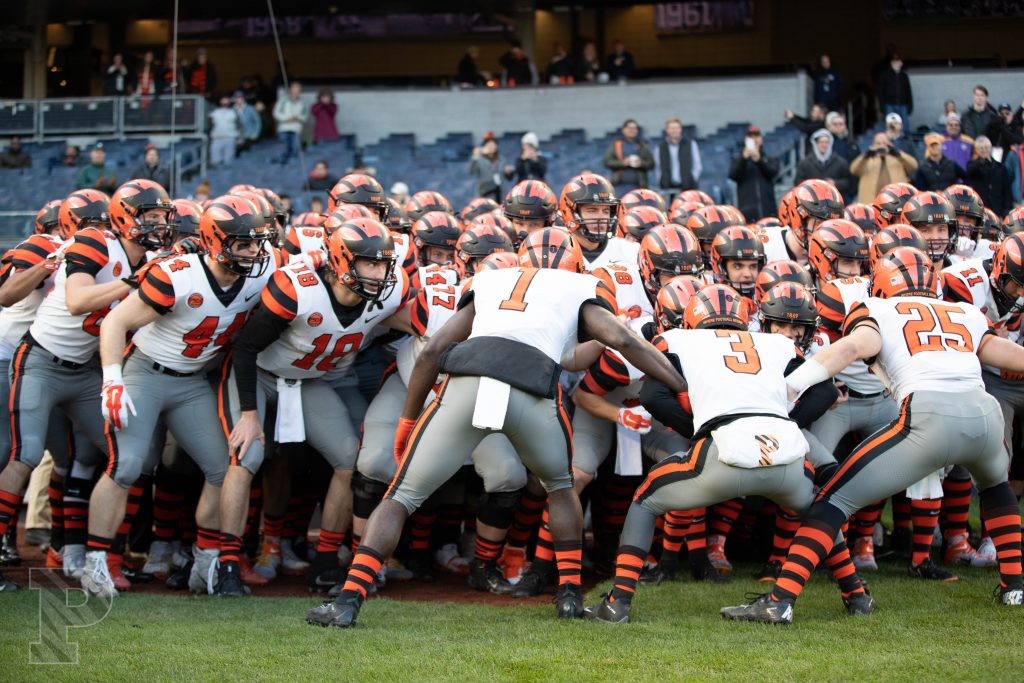 Before this preview, I’d like to pay tribute to Jay Greenberg, who did an incredible job covering Princeton Football for this website for many years. Jay, who passed away over the summer following a lengthy illness, was a Hall of Fame hockey writer whose byline appeared in some of the most impressive newspapers in North America, including the New York Post, the Philadelphia Daily News, the Toronto Star, and many others. You would never know of his illustrious credentials if you met him; he was a humble, kind man with a terrific work ethic and a gregarious laugh that I will terribly miss in the press box. He only cared about the story in front of him, and he did his best to get it right (which he usually did). He loved Princeton Football, he loved to tell the stories of Princeton Football, and he enhanced what has been one of its most amazing decades in a program that has been around more than 150 years.

Princeton Football shares its condolences with his family and friends, and we are forever thankful for the passion and energy he put into sharing our stories.

The Princeton Football team always starts later than everybody else in the FCS. Usually, it’s by two weeks. This year, it’s by several months. When Princeton lines up to play Lehigh this Saturday (Goodman Stadium, 12 pm ET), the Mountain Hawks will have played five times in 2021 already (three games last spring, two this season). Princeton won’t have played a game since Nov. 23, 2019.

What does it mean? Like most things that have happened since the start of 2020 … nobody knows.

Here’s what Bob Surace does know. He has spent a preseason camp working to bring together a team that includes freshmen AND sophomores who never stepped on the Princeton campus last year, seniors who were supposed to graduate in 2021, and a mix of players in the middle — some who practiced on campus last season, and some who remained remote all year.

It wasn’t the ideal situation, but when you start 2-20 as a head coach at your alma mater, you learn how to figure it out. Surace’s teams have gone 54-24 since that start, and they have several players who helped Princeton go 18-2 between the 2018-2019 seasons. This is different than any situation Surace has faced at Princeton, but he won’t shy away from it, and neither will the team.

There are plenty of questions to be answered this season. Here are 10 of them.

1) How strong is the leadership of this team?

When your team is dispersed around the country through a pandemic, you need leadership throughout the program. When the coaching staff asked the 2021 Tigers to vote on captains, it was clear that type of leadership was around. Six players — some who played key roles in the 2018 perfect season, and some who never saw the field — were honored by their teammates as captains for the upcoming season: Collin Eaddy, Trevor Forbes, Nikola Ivanisevic, James Johnson, Cole Smith and Jeremiah Tyler. GoPrincetonTigers.com had a small writeup on each player.

2) What offensive areas return the most experience?

Let’s start on the offensive line, which can rival almost any line this century in terms of accolades and potential. Both Henry Byrd and Reily Radosevich are previous All-Ivy honorees, so they’ll look to lock up the left side of the line. Center Niko Ivanisevic started every game in 2019, a major asset when you are starting a new quarterback, and both David Hoffman and Connor Scaglione are coming off big offseasons. There is quality depth behind them, but that five-man unit — if it can stay healthy — could be the best Surace has coached at Princeton.

Collin Eaddy doesn’t need too much help — he is a two-time All-Ivy running back — but he could be in for a monster season behind that line. He has rushed for more than 1,800 yards and 18 touchdowns in his career, and he averaged 5.8 yards per carry. Give him the ball (and Princeton did 172 times in 2019), and he’ll get yards.

3) How much experience returns in the passing game?

From the quarterback perspective, there isn’t much from actual Princeton games, but that hasn’t limited the enthusiasm from the offensive staff. Cole Smith has thrown six passes in his varsity career, and that makes him the clear leader in the room. Princeton hasn’t faced this type of inexperience since 2015, when Chad Kanoff took over the offense (and went on to a record-breaking career). Whether records will fall this season remains to be seen, but Surace likes the options in this offense, between Smith, classmate Brevin White, Colorado transfer Blake Stenstrom and junior Joseph Hutchinson.

4) How about the passing game targets?

There is definitely more experience there. It’s not easy when you follow in the All-Ivy (and All-America, in one case) footsteps of Jesper Horsted and Steven Carlson, but the returning trio of Jacob Birmelin (All-Ivy in 2019), Dylan Classi and Andrei Iosivas combined for 112 catches, 1,525 receiving yards and 10 touchdowns in 2019. They provide a nice skill spread for an offense that wants options at all three levels.

Tight end Carson Bobo earned second-team All-Ivy honors and is the best pass-receiving tight end that Surace has coached at Princeton. He can be on the line, split out at receiver and do just about anything asked of him.

5) What defensive group does Surace consider the deepest of his Princeton tenure?

That would be the defensive line, which is led up front by Sam Wright, a likely NFL camp invitee next year. Wright is as strong as they come and was a handful when he was just figuring out the position, and he took a step forward with an All-Ivy season in 2019. Now he is the unquestioned leader of a group that could get big seasons from the likes of Uche Ndukwe, James Stagg, Tola Banjoko, Michael Azevedo, Alex Kilander and Carter Christopher. The ability to rotate capable linemen is invaluable, and Surace likes this group a lot.

6) Is there a potential Defensive Player of the Year in Orange and Black?

When you have the 2019 finalist returning, it’s safe to answer that question yes. Jeremiah Tyler is a preseason National Defensive Player of the Year and All-America candidate after recording 62 tackles, 14.5 tackles for loss and 3.5 sacks during an incredible 2019 season. Tyler has been making impact plays ever since his Princeton career began during the 2016 Ivy championship season, and he would love nothing more than to end his career with a third Ivy League championship.

7) Is Jeremiah Tyler the only experienced linebacker for Princeton?

Not by a mile. The Johnson brothers have owned the inside linebacker position for Princeton over the last decade, and James is ready to punctuate that run with one more All-Ivy season. He led the Tigers with 67 tackles as a junior, while fellow inside backers Daniel Beard and Anthony Corbin both gained experience that season. While Tyler terrifies opposing offenses from one outside linebacker position, both Ike Hall and Matthew Jester can make game-breaking plays from the other side as well. There is depth behind this group, and Surace is excited to see if any can break through early in the season.

8) Whatever happened to those inexperienced defensive backs in 2018?

When Princeton was preparing for its eventual perfect 2018 season, a big question surrounded a group of inexperienced defensive backs on the roster. Guys like Delan Stallworth, Trevor Forbes, Christian Brown and Matthew Winston were thrust into important roles, and they got the job done. Three years later, they’re still here and could form the league’s best backfield. Stallworth (CB) and Forbes (SS) bring the most experience, having combined for 213 tackles and 18 passes defended in their careers. Brown, Winston and Sultaan Shabazz (the 2019 team interception leader) give Princeton incredible cornerback depth, while a handful of talented young players compete for the free safety position.

9) What else could be special this season?

Will Powers provided a special teams boost as a freshman in 2019, earning All-Ivy honors after averaging more than 40 yards per punt and allowing only three to be returned. Jeffrey Sexton will look to make a similar impact as a freshman placekicker this year. That’s a position you love to have experience at, but Surace has liked what he’s seen from Sexton so far. Ryan McNeil has been steady and consistent as a long snapper, which is exactly what you would want from that position.

First of all, who cares? It’s an actual schedule, with actual games, so it’s awesome. But if you are looking for a deeper dive, Princeton opens Saturday at Lehigh and will play six road games this season, including four in the Ivy League. It opens its home season Sept. 25 against Stetson (1 pm), and its Ivy League season Oct. 2 at home against Columbia (1 pm). The other two home games are against rivals you might have heard of: Harvard (Oct. 23, 1 pm) and Yale (Nov. 13, 1 pm). Every game will be streamed on ESPN+ in 2021, and Friday night road games at both Cornell (Oct. 29, 7 pm) and Dartmouth (Nov. 5, 6 pm) will be televised on ESPNU.

We will have a look at the upcoming game each Friday of the season, and a feature story each Tuesday or Wednesday. Princeton football is back, and we couldn’t be happier. 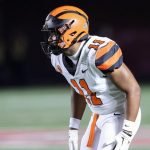 FOOTBALL TO HAVE SEVEN REPRESENTATIVES AT JAPAN-U.S. DREAM BOWL 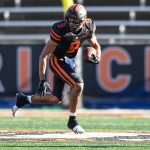 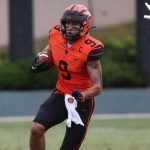 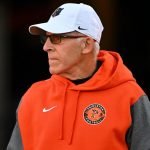